Feeling Overwhelmed or A Christmas to Remember

Our daughter Cyndi, her husband Dave, and the kids drove down on Christmas Eve. Since we are short on beds in our house, Dave and Cyndi stayed out in the 5th wheel, Ben took the guestroom, and Gracie slept downstairs in my studio.  Cyndi arrived with a boot on her foot due to some fractured bones in her ankle.

Son Daniel and his girlfriend Heather were here for Christmas morning as well as sister-in-law Ok Hui and niece Kayla.

Christmas Eve and Christmas Day were really nice. The grand kids always enjoy visiting the hen house and gathering eggs. The last time they were here they got to feed the cows out in the pasture because the barn wasn't built yet. This time it was much nicer for them. Not warm, but nice and dry so they could feed the cows their hay and then stay and watch without running for cover from the rain.

Here is Ben helping out. 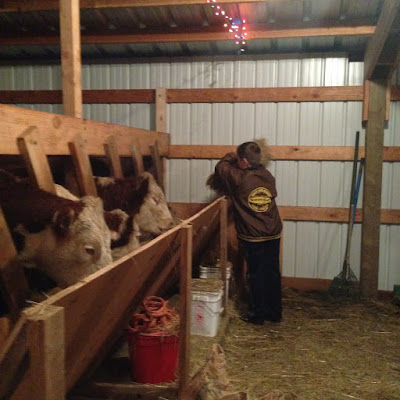 And Grace was right behind him. 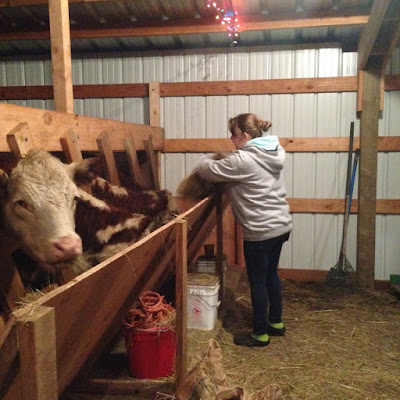 The next morning Tim called me on my cellphone saying something was going on with our oldest cow. She had a discharge coming from her hind end and low and behold, her udder was full and hard. OH MY GOSH! SHE'S CALVING!!!

Let me back up a bit here.  When we purchased our two calf/cow pairs last April we knew it was possible they had been bred because they were living in a pasture with a bull.  There is a window of time that a cow can be "back-bred" after she has a calf.  We were hoping that was the case actually.

As time went on there was no sign whatsoever of a pending birth. Nothing, Nada, Zip.
Obviously we new farmers haven't a clue what we are doing!  In any case, we gave up hope as the months wore on and then completely forgot about it when the rain set in and the mud hole grew alarmingly.

So when Tim's call came in I flew into a panic, sounding the alarm to the household "We are having a baby!  A cow is giving birth!  Grab your coats I'm heading for the pasture!"

When I got there she was still standing, back hunched up and tail lifted.  She mooed and moved restlessly until she laid down for the event.

I had seen videos online of calving so I wasn't hysterical when the water bag appeared from her back end.  I had to get up close to see if there was a nose and two front hoofs inside that sack.

By this time our whole family was watching from the fence line and the next door neighbors came out with their three young girls to witness the miracle. 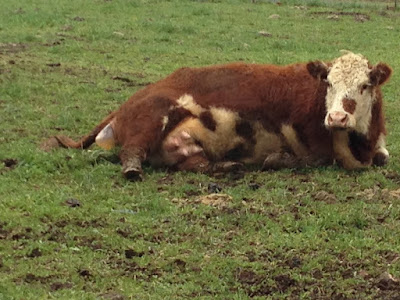 It seemed like forever, but was probably 20 minutes, before she finally pushed the calf out. 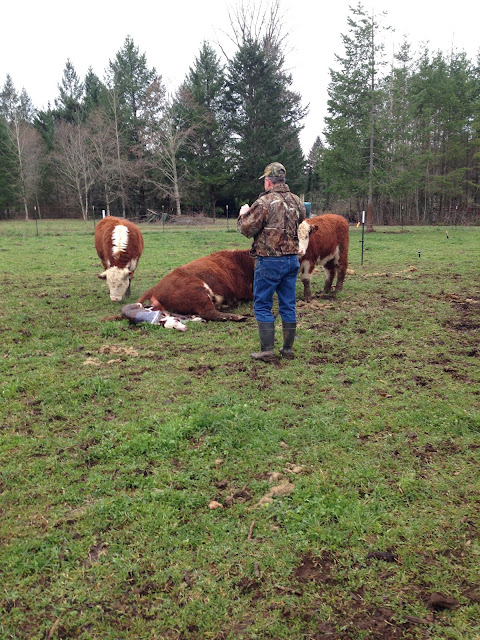 In moments she  was standing and cleaning her baby.
She had to roughly lick her to get her breathing. 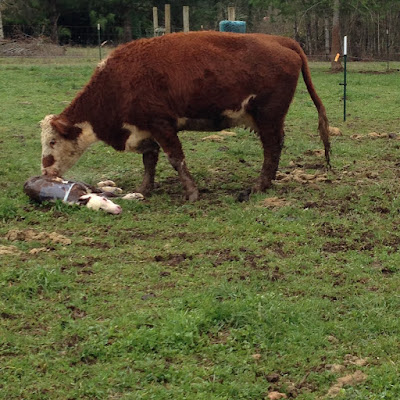 The rest of the herd was very curious.  We quickly opened up a new section of pasture for them so they would leave the calf and cow alone. 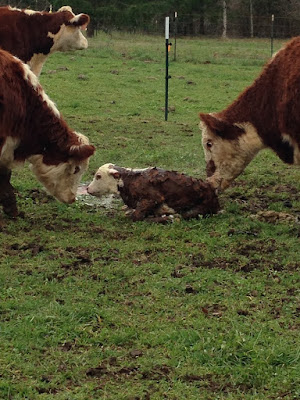 At this point we didn't know if we had a Heifer or a bull.
Here she is trying to stand, with her mama giving her a nudge. 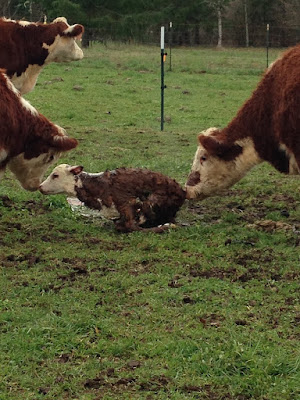 Crash and burn - it happened a number of times. 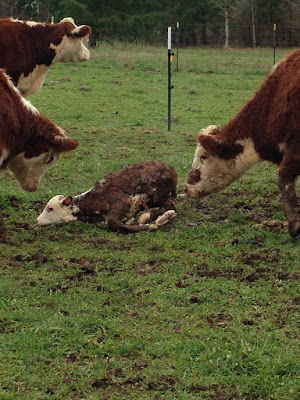 Once we got the other cows out, and the mama looked like she had everything under control (God is so amazing!), we headed for the barn to construct a makeshift corral for the pair to live in for awhile to be dry and warm.  I knew from what I'd read that the calf needed to be both dry and warm.  The barn was the best we could do.  I would have brought her into the kitchen by the wood stove but Tim looked at me like I was smoking that funny stuff! So, the barn had to do.

Time to rest up a bit. 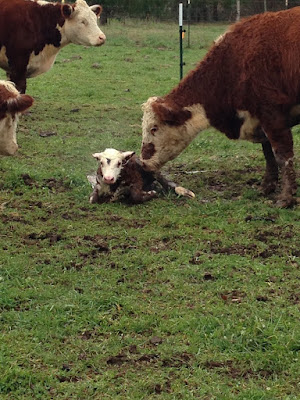 When we got back out to the pasture to check on them, this ghastly thing was hanging from the cow.
I, newbie farmer that I am, was certain that her insides had come out and she was going to die!  I called the Vet. (At least I didn't call the Fire Department!)  The only reason I even have this picture is because the Vet had me email it to her.  She suspected it was the placenta, but wanted to be sure.  She told me the placenta is attached to the uterus and sometimes it takes a while to detach and fall to the ground.  Sure enough!  By the time I got the picture off my phone, onto the computer, (I can't email from my phone, no I don't know why) sent the email to her, and raced back out to be with my dying cow, the placenta had dropped, she was fine, and she was eating the horrid thing!

(I'm thinking maybe I won't make such a good farmer after all???) 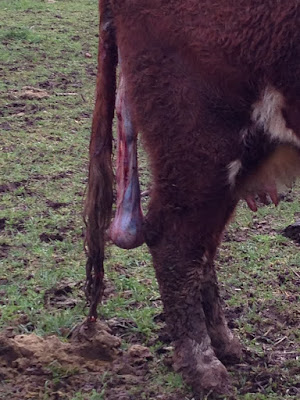 Then there was the need to move the calf to the barn.  Tim thought she might weigh around 40 pounds or so... turns out it was closer to 90+.  He had to carry her quite a ways to the barn, with Mama following close behind.  Several times he stopped and set her down.  I was truly worried about his heart, but it was his back that was the problem. (It's still hurting him!)

Once we got the calf into her new home she adapted quickly. 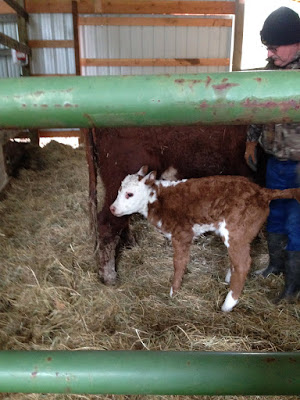 She had a little time to bond with her Mama, but she still had not nursed. 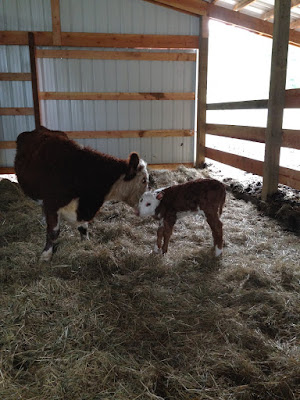 Finally, Tim had to help her find her way to that lifesaving colostrum supply but she couldn't seem to figure it  out without help. 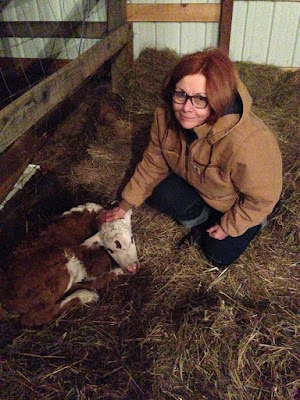 We continued to worry about her nursing because most of the time she was laying down in a corner when we would go out and check on her.

After a long sleepless night she still wasn't actively nursing and we were getting close to panic mode.

But at 1:00pm when we went to check on her, this is what we found. We knew she was eating because when a calf is full she will run and jump and play.


So, there is much more that needs to be done quickly to keep this little girl safe and healthy while accommodating the needs of her mother.  AND we are pretty certain now that the other cow is pregnant and we will have even a bigger mess challenge on our hands in the very near future - like any time now.

Add to all that the fact that we are flying to California for almost a week, the end of this month, and we will have a young woman house/farm/dog sitting for us who has never been here before.

But throughout the entire time God was faithful with miracle after miracle. I could list them all for you but this post has become quite long and I'm sure you are tired of reading.  Suffice it to say, we are so grateful.  Without His direct intervention, we would have a much sadder story to tell.

We belong to a group that gets real food, fresh from the farmers, and once a year we are able to order truly raw, untreated, almonds. 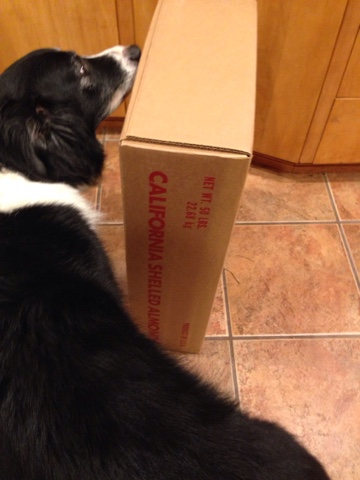 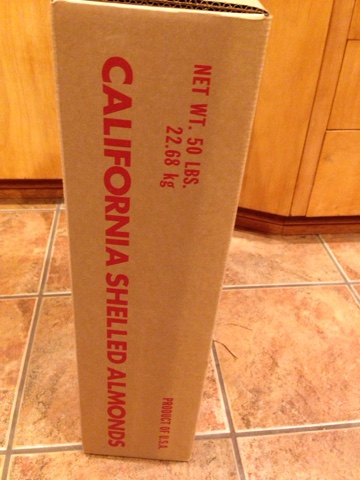 And the day the almonds arrive we stop whatever we are doing and get them measured out, vacuum sealed, and into the freezer. 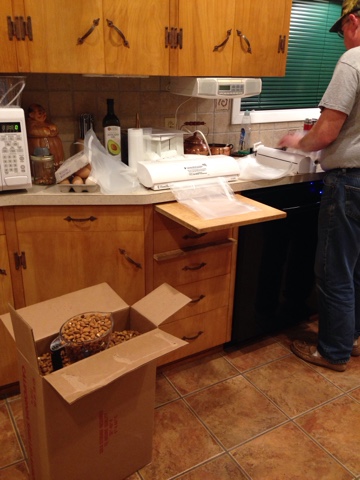 We eat almonds every day. 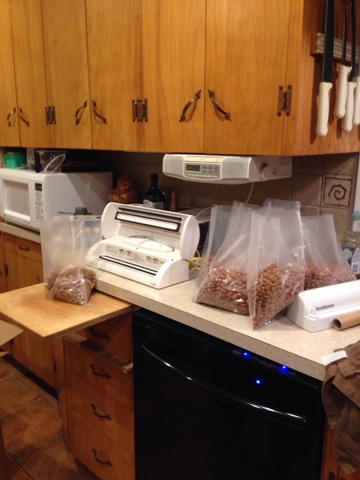 When we are close to running out of them in the kitchen, I pull a bag from the freezer, dump them into a bowl of water with a tablespoon of sea salt, and soak them overnight. 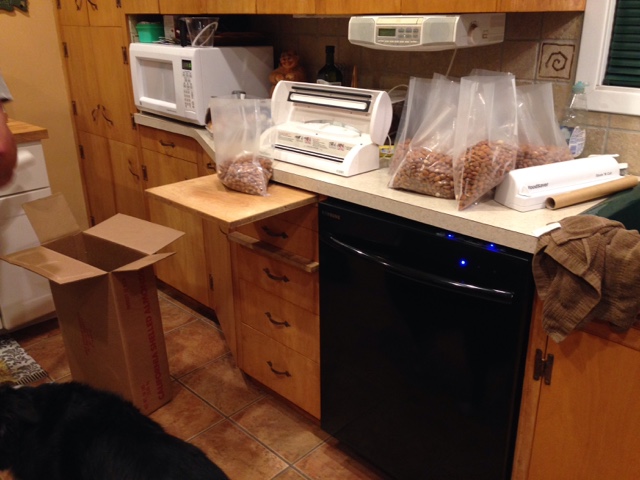 Then I put them in my dehydrator at about 105 degrees, and dry them until they are crispy. It make take up to 4 days. Sometime in the future I will do a separate post on that. 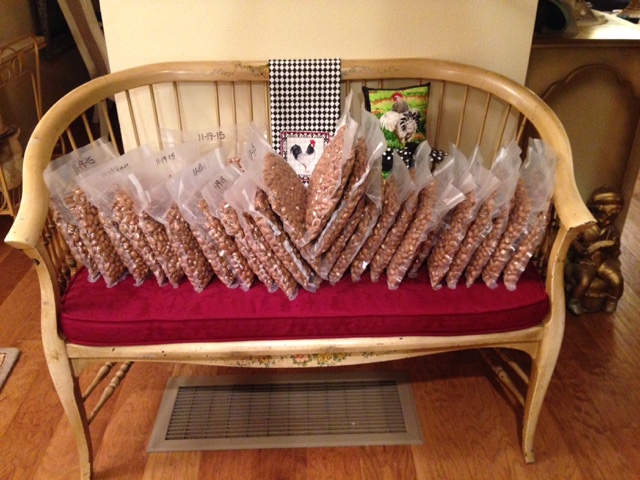 Here we have our 50 pounds of almonds ready for the freezer!


Thanks for stopping by.

During a recent storm we checked our weather station hanging on the kitchen wall and were quite amused to see the scrolling print at the bottom edge. 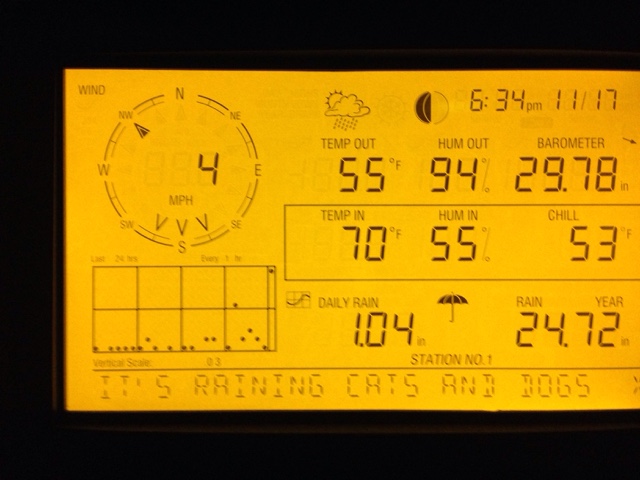 That was quite a storm. 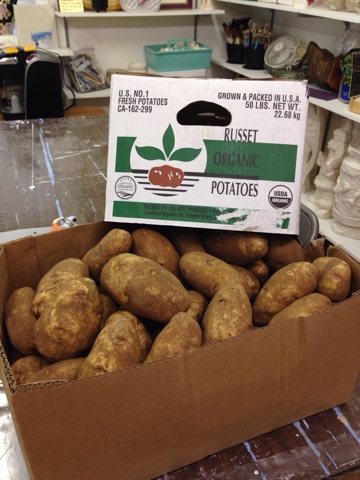 We got a deal on a 50 pound box of Organic Russet Potatoes and we had been wanting to try canning potatoes, so this seemed like the perfect time.  We couldn't believe how beautiful these potatoes were.  They were huge! 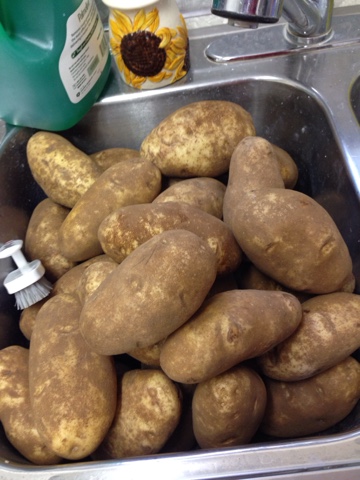 First they got a good scrubbing in the sink. 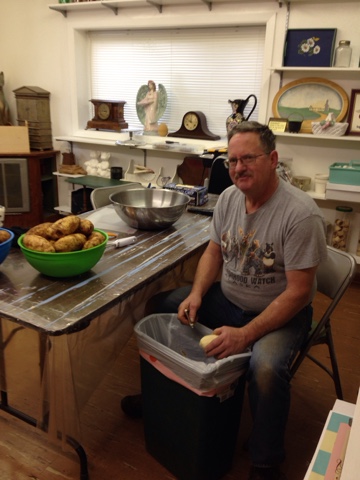 Then Tim volunteered to do all the peeling. Bless him! I cut them up into small pieces and we soaked them to get some of the starch out. We changed the water several times before transferring them to pans of water on our wonderful vintage stove we use for canning. ($100 on Craigslist and it works - I kid you not!!!) 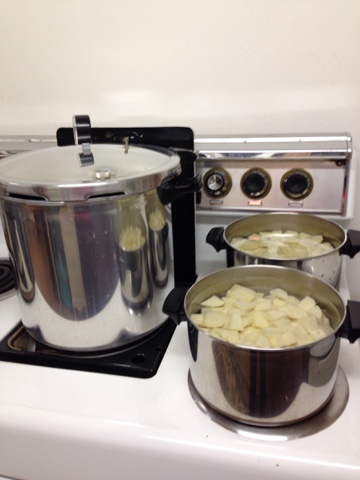 Then as the pressure canner was heating up with jars in it, we began heating the potatoes just enough to get them hot but not cook them. We were told they would end up mushy if we let them cook. 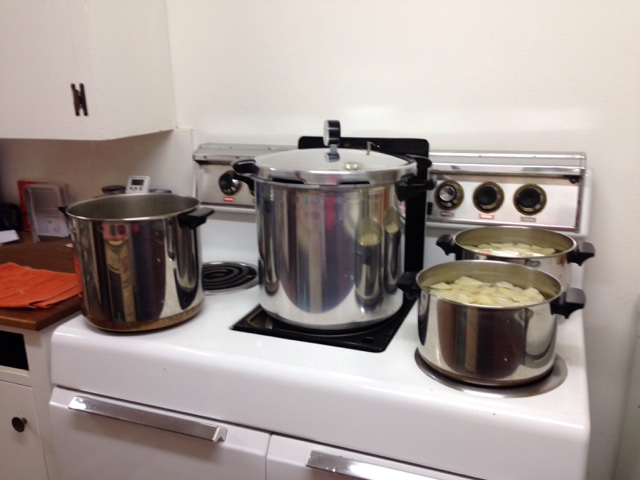 On the left is a large pan of clean hot water to pour over the potatoes after we put them in the canning jars. 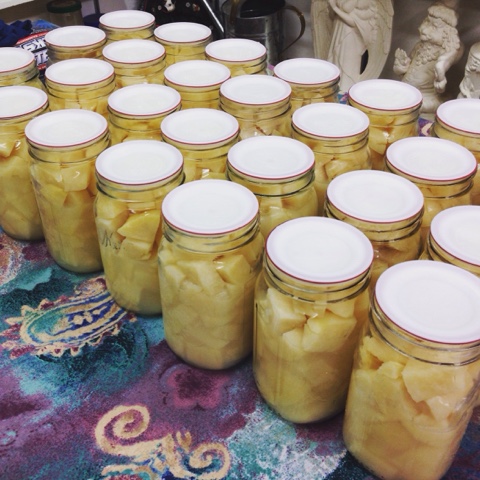 We ended up with 28 quarts of potatoes to enjoy all winter, and we still have about 20 pounds left in the "pantry" on our awesome Orchard Rack (my Christmas present last year).  The water ended up "starchy" when the jars cooled, but we were assured that it will not affect the taste or the safety of the contents.  If we had been more patient and soaked them longer, we could have gotten more of the starch out.  Something to remember for next time!

A Big Day On The Farm 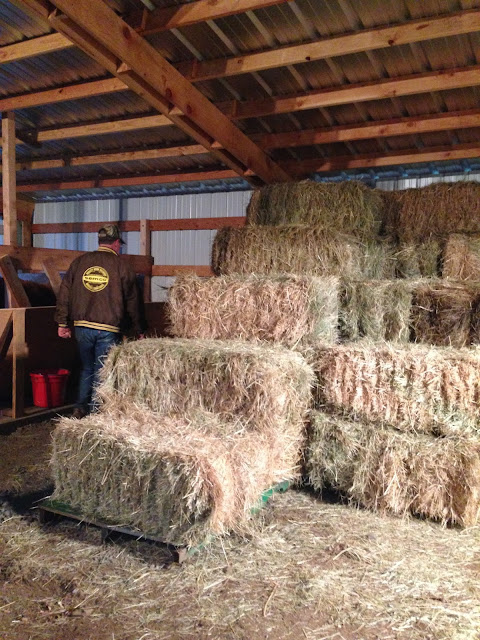 Yesterday was a milestone for us.  After all of Tim's hard work, we fed the cows in the barn last night for the first time.  It took some coaxing to get them in there.  The calves were the first to explore and find the manger full of hay.  Eventually the Moms came in too.  It was raining incredibly hard which made it even more of a blessing to have them under cover with dry food. 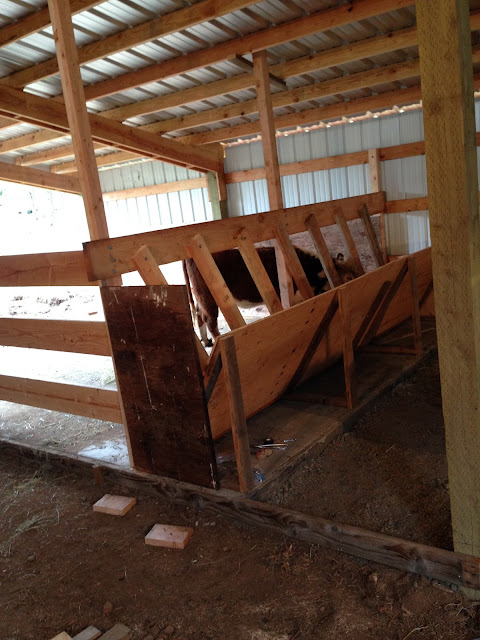 Today he wired the lights and this evening when I go out to feed them I will be dry and so will they.  It does my heart good :)