I read about fodder for cattle some time ago and mentioned it to Tim.  He really wasn't interested.  We had plenty of pasture and hay in the barn.  Well, the pasture got eaten down and then winter came - the hay, long gone has been replaced several times with tons and tons.  So, when I came across another blog post about fodder I sent it to Tim's email.  This time he got hooked!

So he scoured the local nurseries to find the right trays, bought some barley seed at the feed store, and built a rack for the rotating system. 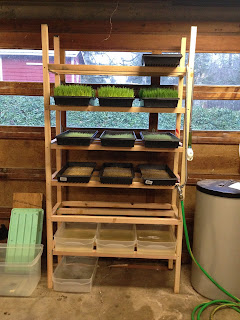 The seed is soaked for a certain amount of time, then drained and put into the bottom trays.  Every few days new trays of soaked seeds are added and the bottom trays move up a shelf. 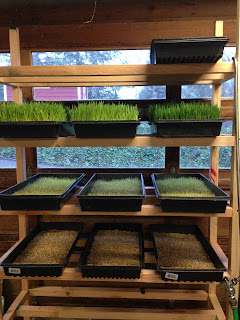 The whole thing is watered from the top several times a day.  All of the trays have holes in them to drain into the trays below them.  On the very bottom (you can see in the first picture) the clear trays catch the water and are emptied out in the driveway when they get full.  The water cannot be reused because it stinks and will quickly mold your sprouts. 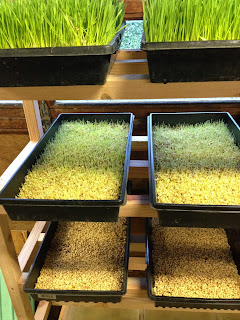 When the "grass" gets tall enough you take the tray out to the hen house and barn! 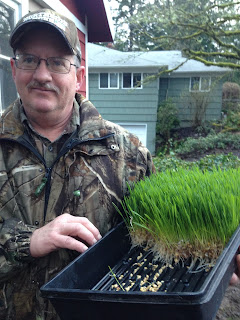 The hens were actually more interested in the barley seeds than the grass.  They did eventually eat all of it though. 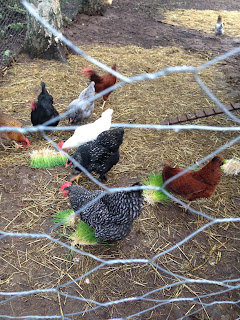 The cows were not too interested either, which totally surprised us.  They did eat it, but only when there was nothing else to eat. 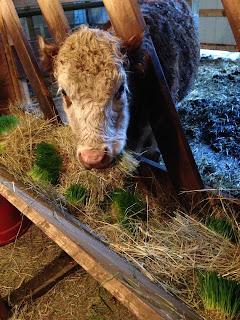 I think the problem was the barley.  Had we used a mixture of wheat, oats, and barley, maybe it would have been more appetizing.  Possibly wheat or oats by themselves would have worked.

Those questions will have to be answered some time in the future.  After a couple of weeks the whole rack of fodder developed mold and we had to shut it down.  We had the rack set up in our basement where it wasn't a warm enough environment to grow properly.  Live and learn.  Just another lesson in farming!