Rogue Chickens in a Blizzard

We were warned by the weather man that a big snowstorm was moving in yesterday.  When the flakes started falling, I left work and headed for home.  The wind was fierce.  I made it home with no problems other than slipping and sliding up our driveway.  By the time Tim got home there was a white-out happening.  He fed the cows and went to check on the chickens and found there were only 8 of them in the hen house.  So we grabbed flashlights and I bundled up, and out we went to hunt for 5 missing hens.  We found them huddled out of reach underneath the coop.  Tim got a long pole and tried to scoot them out.  They just went deeper.  We sent Higgins under the coop to "herd" them out, but they were not budging.  It was bitterly cold and the snow was blowing hard sideways.  We knew if we didn't get them out of there and into the coop they would die. It took us about 30 minutes or so and we finally pulled the last one out and put her in the coop.  This morning they were all still alive - praise God!  We left them locked in the coop today just in case they go crazy again.  Stupid chickens!

And speaking of stupid...  I was so intent on helping Tim that I never even covered my head with my hood.  So I was covered with snow and my hood was filled with it!  Burrrr!!!! 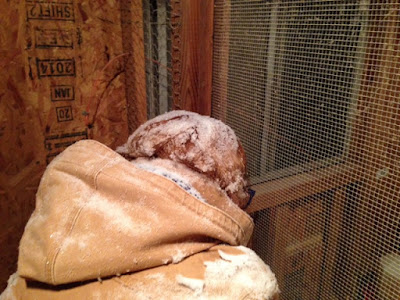 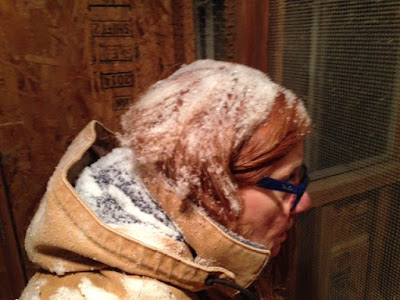